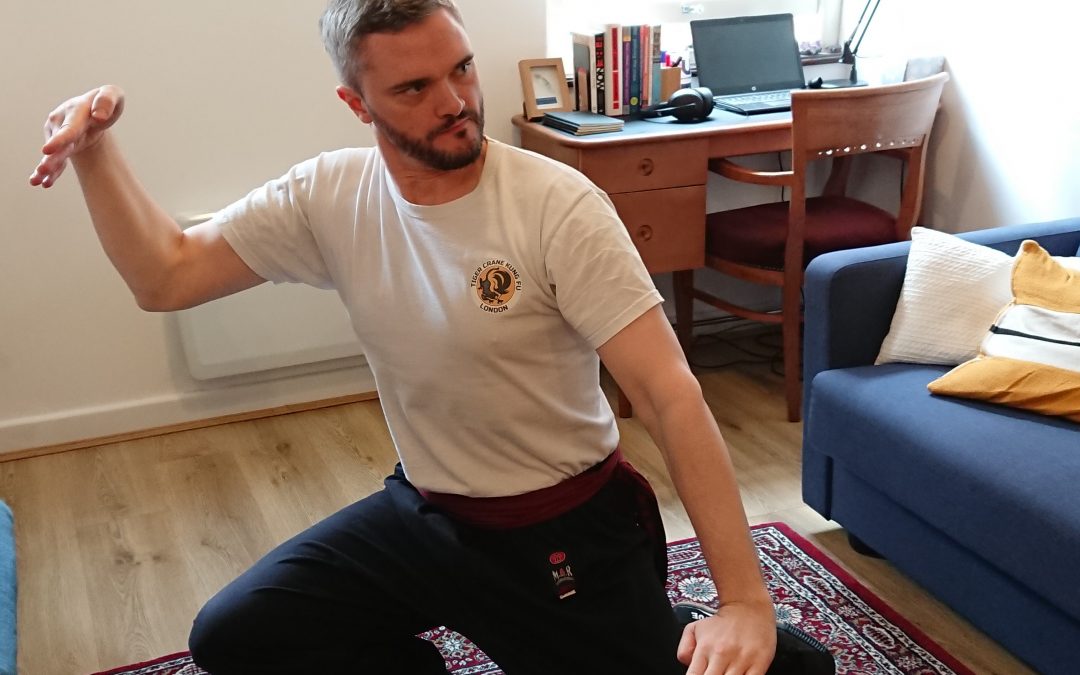 I have been training Tiger Crane Kung Fu with Instructor Dave Courtney Jones for… Well… let’s just say it’s a number of years incommensurate to my progress through the pattern gradings! When it became necessary to move away from London for work in 2018, I continued to train with the club, though not as frequently as I would like.

People often find it odd – to put it mildly – that I travel the 100 miles from Leicester to London of an evening, after working all day at the university, to participate in kung fu, patterns, and sparring classes, and return, sweaty and exhausted, on a train that gets me home at midnight. And then get up to teach the next morning. Those people have never trained with a club like Tiger Crane Kung Fu.

Learning kung fu has not only meant learning to fight, although that is of course the central function of the art. It has also meant learning mental discipline and focus, learning about myself, my mental and physical limits, and how to overcome them. It has meant gaining a martial ‘family’ of kung fu brothers and sisters, who I train, spar, and socialise with. It has shaped my own approach to teaching and learning as a university lecturer, and helped me become more disciplined in my research and writing. That it has given me the mental and physical strength to feel able to intervene in potentially and actually dangerous situations has been but one among these many benefits.

It is this holistic, unending process of self-transformation that keeps me going back for more. So when the Covid-19 pandemic came, I was worried that my training would be further reduced. But Instructor Dave – who has a profound understanding of the less tangible side to traditional Chinese martial arts, but is an engineer by training and not afraid of a hi-tech solution! – came to the rescue with live videoconferencing classes using Zoom.

I was the ‘guinea pig’, taking the first remote class after I experienced some cold symptoms, just as the pandemic was taking hold in the UK, meaning that travelling to class might endanger others. I wasn’t sure how well it would work, but it was fantastic! Not only did the tech hold up, but the ‘panopticon’ effect seemingly made me push myself even harder than usual. By the end of the first kung fu class, I was shaking and drenched, though yet to imagine the pain of the ‘DOMS’ that would set in over the next couple of days. In a second class, I learned the first movements in a new pattern from Instructor Maki Nakasone, as she and Dave gave me live feedback on my every mistake!

Since that evening, I have ‘Zoomed’ into class every couple of days; I am training more than I was before the pandemic. And I can categorically say, at the end of a long day working from home (the university has suspended face-to-face activities and, like the kung fu club, we have switched to delivering online classes) I can think of no better way to maintain physical and mental health.

I’m sure that there are other practices that can help at the end of a day spent staring at screens in a confined space – meditation and mindfulness exercises, or yoga. But sometimes you need to push yourself physically until you feel you have nothing more to give and then, just as you need to collapse in a sweaty mess, be told it’s time for a couple of minutes in lower horse-stance, or in iron bridge (on your knuckles, of course).

If you’re interested in trying out the Tiger Crane Online Kung Fu classes, you can find more information here.