When the Living Room becomes a Training Hall 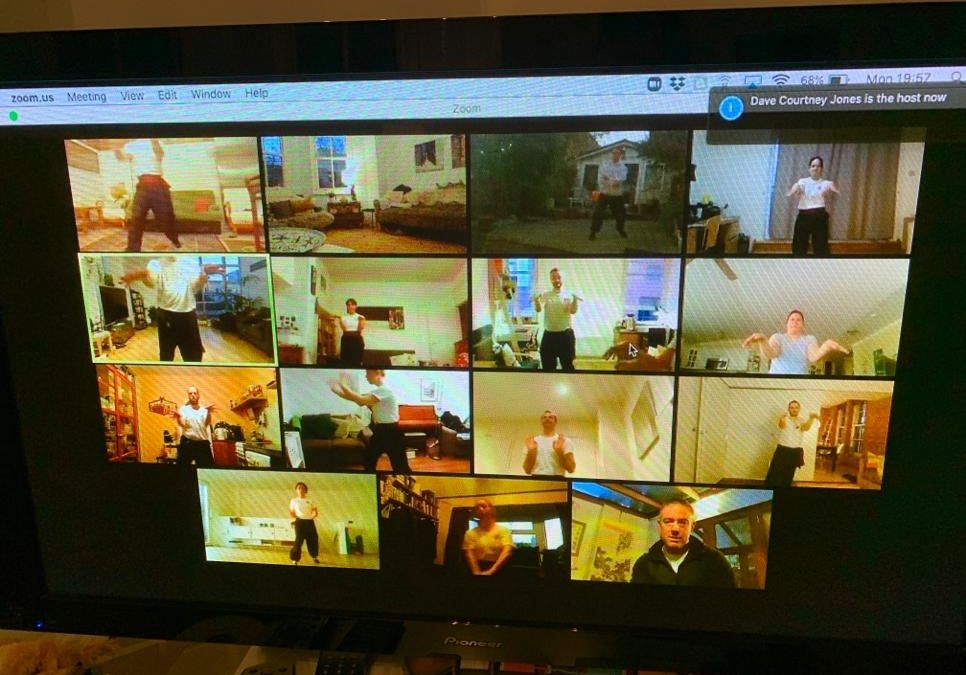 So. I’m in the living room in Brighton, which… well, it isn’t very big. OK, it’s tiny. Barely big enough to swing a cat (that’s a cat-o’-nine-tails, not an actual cat — little history snippet, there). I’m looking at the screen, on which I can see Dave, myself and my classmates. The Zoom meeting is in gallery mode on my laptop and that means I can see everyone at the same time.

Dave has told me what I need to do to improve my pattern and I’m getting increasingly frustrated that I haven’t managed to do it yet (not can’t — never can’t). But a strange thing has happened. Because I’m in the living room, with my significant other leaving me alone to train (he’s good like that), I am finding my mind working differently to how it normally works.

I can feel it. It’s a tangible thing and it’s kind of weird (and I’m used to weird, but bear with me). It’s as if a switch has been thrown in my head and I’m thinking in a different way. I’ve got more time, for one thing. Usually, going to class involves a short bus trip, a train journey of around an hour, plus a trip on the Tube, and door to door generally takes me just over two hours. More, if there’s a delay. That’s at least four hours I have to account for on a normal day, as well as organising food and factoring in waits for buses and so forth.

Now we’re online, I can decide to train at the last minute if I need to, whereas I never normally can, and this means I can get more done right up to the wire (including finishing the chapter in that book I’ve been reading). And as I stand in the middle of the really tiny floor, I’m forced to move, as well as think, in a different way. I have more time, but less space. Less space means I have no option but to move in such a way that I don’t knock over the washing on the airer or bump into the desk (especially as it has not only my laptop on it, but lots of my boyfriend’s stuff as well, including his computer).

I can see things on the screen that I can usually run away from. Even seeing myself in the full-length mirrors in Thursdays’ training hall, I somehow always manage to kid myself. There, I’m seeing the opposite of what’s really happening, and for reasons that will probably always remain a mystery, that’s meant I’ve been unable to check myself as thoroughly as I can when I’m seeing myself — the right way round — on my laptop screen.

I know. It’s weird. And hey, I don’t know, either, but somehow, something has changed and I’m no longer able to hide from my own inadequacies. Any of them.

So. I’m standing there. I’m working out, move by move, step by step, muscle by howling muscle, how to move and resemble a fully-functioning adult female human being. Which is, after all, what I am. And I have to do all this without knocking anything over, without breaking anything and, crucially, considering I’m technically on my own and don’t generally have to think about it, without swearing. (Thank whatever god or goddess is listening for Zoom’s mute function.)

I think this change has something to do with that — being on my own and yet not alone. I’m in the room on my own, for sure. But everyone who also has their screen in gallery mode can see me. And what’s most important, from my point of view, is that Dave can see me. Not only can I not hide from myself, I can’t hide from Dave, either. (Not that I ever can. I don’t kid myself about that.) OK, so the camera distorts bits of me, making my limbs look awkward or completely wrong; the light streaming through the curtains lights me up like a beacon or like some sort of deity, so I have to adjust or do without natural light (and I do like my natural light); and at no point is all of me visible on the screen at the same time, so I have to angle my laptop so that Dave can see my feet, or my core, or that my legs are stretched fully out on the floor, or whatever. I’m also limited as to where I can sit my laptop — on the desk, or on the floor. That’s basically it.

And as I move in slow motion, now, trying to work out the best and most efficient way to get my body to do what I’m telling it to do (instead of doing its own thing and ignoring instructions from me, like it usually does), I feel something shift. Click! Well, it’s not exactly like that. But I become very aware that there’s been a change.

I check with Dave. Is this right? Am I thinking correctly? Is that supposed to happen? This feels right but it was an accident — is that the way it’s supposed to be? Yes? Yes!!! Well, sometimes.

Do whatever it takes to get it right, Dave tells me. So I’m trusting myself for a change (and believe me, that’s some sort of achievement — I trust my instincts, but where kung fu is concerned, rarely myself). Do that move ten times more slowly, says Dave. I try it. No, that’s three times more slowly. Ten times. Oh dear. How do I manage to move that slowly without falling over? Adapt. Adjust. Think of it like tai chi. Slow. Balanced. Drive with the legs. Listen to my body. Which muscles are kicking in when I do it like this? Which ones are screaming at me because they’ve been pretty much dormant until now? Ah… there they are. And they remind me where they are while we’re watching King’s War on Netflix in the evening and again when I wake up. I’m 45, I remind myself, not 85. It’s just the training. I’m meant to ache like this. It just hurts. IT’S ONLY PAIN!!!

And this is where I find myself, literally as well as figuratively. With aching legs and a mild sense of achievement.