That which doesn’t kill you… 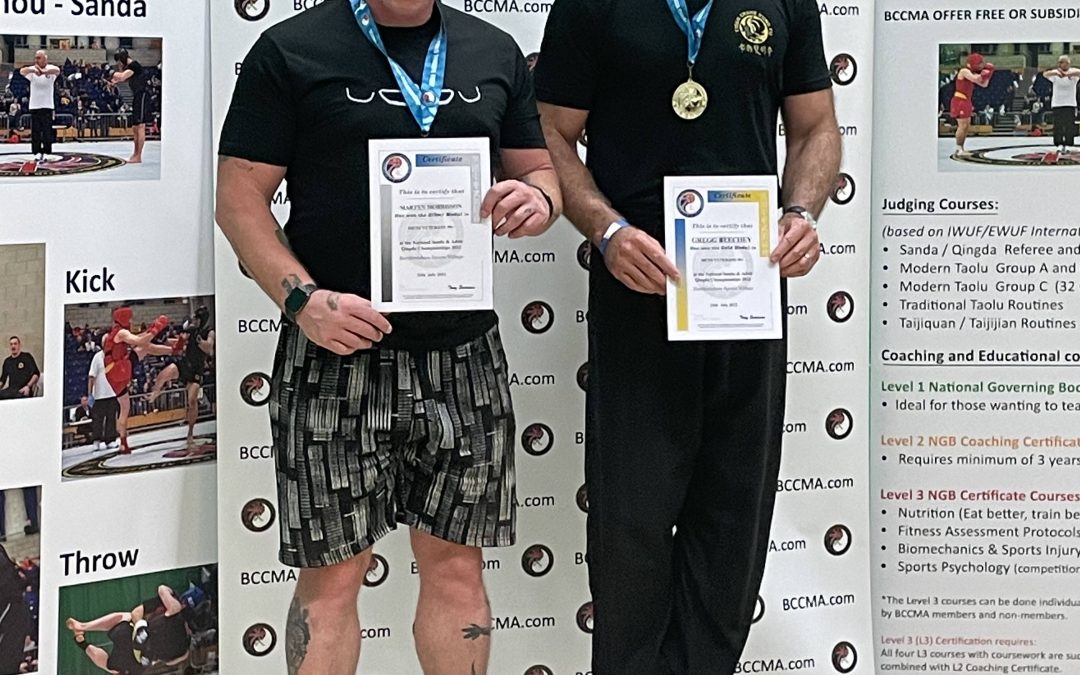 I stand, on the mats, in front of the crowd, officials all around, looking at the enormous guy I am due to fight.  How on earth did I end up here?

Taking a step back, I have been training Kung Fu for something like 8 years.  Before this year I had tried sparring class now and then but had taken it no further than that, and certainly hadn’t given any thought to competing in, well, an actual competition.  However, somehow the enthusiasm shown by Dave and some of the seniors proved infectious and I decided to throw my hat into the ring (so to speak) for the BCCMA National Sanda and Qingda Competition.

Dave had been very clear that to compete in Sanda (full contact) we would first need to win in Qingda (light contact) so that made the initial objective clear.

Dave was also very clear that agreeing to compete required a commitment to maintain a certain level of training.  I train quite a lot already – (whisper it) not all of it in Kung Fu class – so I am in reasonable shape, but still the competition required a commitment to take it up a level and (as a minimum) join all three sparring classes every week.  That’s a lot of sparring.  However, it was quite remarkable how quickly one progresses from the naked panic that you see in most first-timers to the understanding that it is not a fight.  When you practice sparring you are training with your opponent for your mutual benefit.  In some respects it is almost like a dance – you see my move and counter it, I see your move and counter it.

That’s the theory anyway, it is possible to get carried away, and there have been training injuries, but then we are only human (apparently).

As we progressed week on week it became less of a dance, and more of a contest, beginning to understand one another’s strengths and weaknesses and think about things like positioning to lead our opponents in a particular direction, or a feint to distract them, rather than just thinking about the next strike.

Then there was fitness training.

Then there was strength training.

Then there was pad work.

Then there was conditioning (literally, hitting one another repeatedly in the same place to “condition” the muscles to know what it felt like).

Then.  Suddenly.  It was the morning of the competition.

We all had all our equipment and competition entry organised, all that remained was for me to pick up some of the squad for the journey and to get to Hatfield.  As always there was waiting around for weigh-in, then medical, then briefing of the competitors on rules etc.  Then, finally, we were underway.

Everybody was Kung Fu fighting.  Their kicks were fast as lighting.  It was a little bit frightening.  And that brings us back to my fight.

Each of Theo, Ela and Odysseus were fighting before me so I had the benefit of watching them first – important for me as a first time competitor.  I tried to watch and learn, though maybe I just managed to watch.  I can’t actually relate anything meaningful about their fights I am afraid – my mind was largely focussed on my own!

I am usually the biggest person sparring in class.  In Qingda that doesn’t actually provide the advantage you might expect, the key to success being speed and skill, rather than strength and power, but it was still a little bit of a shock to realise that my opponent was some 20lb heavier than me.  He was clearly carrying “extra” weight, but was also clearly far more experienced than I am, so after meeting him in the queue for the medical I spent some time thinking about my strategy.  He was bigger and stronger.  I would have to be faster, more skilful, and try to avoid getting caught in some sort of grappling contest.  That was the plan anyway.

I was faster than the guy and immediately got some hits in, but he was big, and he kept grabbing me and trying to wrestle me to the floor (which itself gets him a point, and if he throws me out of the ring (“an exit”) gets him the round).

I kept escaping, and trying to flick in with punches and kicks then get away before he grabbed me again.  But it was tough, the intensity dramatically more than in training in class – harder, honestly, than I had expected.  And, whilst I knew it was Qingda and no one should be aiming to hurt their opponent I couldn’t help but keep thinking this guy was big.

Bang.  He hit me straight in the face at what wasn’t full power, but certainly wasn’t “light contact”.That’s illegal on two grounds – strike straight to the face and excessive power.  But, it happens.  I felt myself sway on my feet for a moment but that was the shock as much as anything else, he didn’t nearly knock me out.  Anyway, he was warned not to do it again and we got back to it.   Advance.  Kick.  Punch.  Block.  Punch.  Retreat.  Before he caught me and started wrestling.

When the round ended I was completely unaware of the score.  The judges unanimously awarded the round to me, but I was too busy breathing like a drowning man and trying to get some oxygen into my body.   Then, in no time at all, round 2.

I could feel myself tiring (Already? Really?) but felt I must be winning, I seemed to be getting more hits than him, despite his managing to throw me to the floor a couple of times.  Surely we were nearly there?  This must be nearly it?

Then – disaster!  Another attack led to another round of grappling and this time he threw me out of the ring.  Round 2 to him.

This was it.  Final round.  I think we understood one another – I needed to get in the strikes and get away, he needed to get me on the floor or out of the ring.

We got to it.  More of the same.  I would advance and strike then try and get away before he could start grappling.  We both went over a couple of times (nil point) and both ended up losing our head guards due to all the grappling, each time meaning the round had to be stopped whilst we were re-equipped.

Then an announcement from the judges – they would not award the round in the event of an exit (someone being pushed out) – a point would be awarded but no more.  This seemed to be an attempt to promote the speed and skill that Qingda is supposed to be about, rather than the brute force (sorry, wrestling technique) that my opponent had been relying upon.  But good news for me.

We carried on, I had largely lost track of time and could feel myself slowing, whilst trying to keep at it and stay faster than him.

Then, suddenly, it was over.  I couldn’t see the judges, couldn’t see who had won.  It was only when I saw Theo cheering and lifting his hands in celebration I did the same.

Again the judges unanimously awarded the round to me.  All the training, all the effort, worthwhile.  It feels faintly ridiculous to say “British Champion” – but obviously I will do my best to get over that….

Thanks so much to Dave for his guidance and to the rest of the squad for all the time (many hours over many months) training together.

So, would I do it again?  Certainly.

Has my Kung Fu improved?  Absolutely.

Am I faster, stronger, fitter?  Yes!

So, back to that opening quote…